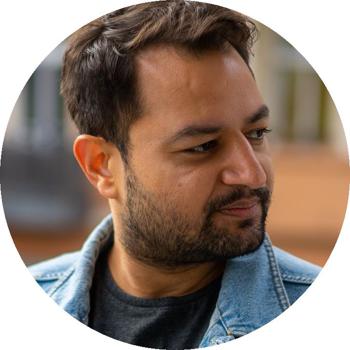 "Do Indian men beat their wives?"
"Ummm…why would you think that?"

"Oh, I have a Turkish neighbour who beats his wife, and Indians are the same so…"
The question was from a classmate in ad school during my first month in Germany, and it set the pace for what was to come after.


Meist gelesen auf Horizont+
I recently read Nell Bhadresha's article on Campaign UK and it made me wonder about my own experiences. And after much deliberation, I decided to talk about my story.

In my nine years in Germany, it's not been uncommon for me to be the only person of color in a company, or even the entire building. At work I've been given feedback like: 'There's a little Bollywood in that idea, isn't it?' I've been asked questions at work like: 'Just like for Turkish people expensive cars are a status symbol, what is a status symbol for you people, the number of cows your family owns?'

The point is, that even after years of working here, I've felt that many people can't look past my Indianness or the stereotypes associated with my culture, and see me as a professional. Lampooning my cultural background with these insensitive comments eventually becomes my glass ceiling and prevents me from being taken seriously as a professional.

Most companies, especially creative businesses and startups, can't lament enough about the fact that diversity is good. Quite a few count diverse faces in Monday meetings and proudly anoint themselves the saviors and acceptors of the 'marginalised' peoples. And for good reason, it's been proven time and again that diversity is good for business, creative quotient and growth.

But the tragedy of the German creative scene is that a diverse perspective is all too often seen as an assimilation problem, which of course becomes my personal responsibility and my personal burden to bear. Nowhere was this more clear than a few years ago when I applied for a job at one of the largest network agencies in Berlin, to work on the pan-European account of one of the biggest brands of the world.
„There is no chance for us to get your profile through. Sorry.“
Saurabh Kejriwal

Teilen
During my application, they said they really liked my work and wanted to invite me to Berlin for an interview with the Executive Creative Directors. We had at least twenty email exchanges and salary discussions spanning several weeks, all met with enthusiasm. Until one fateful day that I was informed HR, in all candor, via email ': 'Unfortunately we can't hire you because our client has specifically asked for a British-born native English copywriter. There is no chance for us to get your profile through. Sorry.'

The irony? The brand I was being considered for is famous for promoting diversity in its ad campaigns since the early '70s.

I couldn't believe the words I was reading on the screen. I've seen rejection from job applications before, and I never paid attention to them because I put it down to wrong role, wrong time. But to be rejected for the place I was born in, something that I even didn't choose, despite their own admission that my work was up to the mark, is something that made the situation seem really unfair. It was devastating, like somehow I was less equal than my peers. That because of my cultural background, I didn't deserve the same opportunities as others.

And while this is a problem in itself, the worst part is that in Germany, this sort of discriminating isn't seen as a discrimination problem at all. I've had several discussions regarding this episode with various people. Most of them agreed that it's commonplace for German employers to take such decisions.

I'd like you to put yourself in my shoes. How would you feel if you were rejected for a job simply because of the country you were born in?
„I was mobbed out of the job within five weeks because they couldn't accept that an Indian could be a native English copywriter. “
Saurabh Kejriwal

Teilen
It gets worse. About two years later, I moved to Berlin to work at a startup as a senior copywriter. In my team were two junior copywriters from "native English countries". I was mobbed out of the job within five weeks because they couldn't accept that an Indian could be a native English copywriter. They would do things like ignore my feedback, go behind my back on projects, ridicule my cultural background, and would gang up on me with many other employees.

I knew in my first week that it was a toxic scenario. Working there was excruciating, like waiting for a train-wreck to happen. Before I left the startup, the company even threw a Christmas party with the theme ' The Darjeeling Limited '. Imagine a room full of people dressed in turbans and Indian wear. I was the only one wearing a suit, to remind people that the theme of the party was meant to be a Hollywood movie, not an entire culture.

The startup claimed to be 'one of the most diverse startups in Berlin. However, as Rishad Tobaccowala once pointed out, 'Diverse faces are not the same as diverse voices'.

Are Indians really native English speakers? I was educated in English at convent schools. English is my first language. Our laws, our constitution, even our news is written in English. If I want to apply for a driving license, I fill out a form in English. The concept of not being native in English was not even a thing for me until I moved to Germany.

Every time I was at the receiving end of racist or discriminatory abuse, I remember making a conscious decision not to speak out publicly. I was afraid that my point of view wouldn't be taken seriously and it would ruin my chances of finding meaningful work in the future. I caved in to fears about being ostracized for speaking out and burning many bridges.

These are the same concerns I have today as I write this. I won't lie, at the moment, the odds seem to be stacked against me for being this voice and running the risk of being labeled as "that" guy.

But I can't live in fear of speaking my truth anymore. And if this article alienates the wrong people from my professional life, it might just be a blessing in disguise.

„Have you seen discrimination at your workplace? Have you supported it, or chosen to keep quiet?“
Saurabh Kejriwal

Teilen
Now it's my turn to ask you. Have you seen discrimination at your workplace? Have you supported it, or chosen to keep quiet?

Do me a favor. Next time you go to work or attend an important meeting, or fire up your Slack, or see your colleagues who are CC'd on important emails, check and count how many people of colour are included. How many are there?

If you do have people of color in your office, ask yourself, do these people have adequate say? Are they in positions of power? Are they passed over for projects or is their input ignored? Is there any office politics that they are at the receiving end of? Is there something you can do to hold space for them or support them?

Or will you consciously choose to be silent on the issue for your convenience?

We all take the world as given at birth. But each one of us, in every action we take, can make the choice to reject the status quo and help make it better. Most of us today can choose to confront our own privilege and help create workplaces that are truly open-minded and mutually rewarding.

The question is, will you make that choice?